You Shall Not Pass

—–
We’re getting pretty excited for this weekend’s release of The Hobbit: The Desolation of Smaug.  (No the kids won’t get to see it yet. But they did enjoy the trailer!) Edgar has been a Tolkien fan for a while.

Alex has now told the complete Lord of the Rings story twice to the children as bedtime stories. He tells it in short installments, and he has some kind of alien robot memory. He includes specific place names, minor characters, lines from the book, lines from the movie–verbatim. Makes my Mary Had a Little Lamb story seem a little…inadequate.

He’s also told them The Hobbit at least twice at bedtime, and we have read the book as a family. So, Edgar’s pretty well versed in Middle Earth Lore.  And “YOU SHALL NOT PASS” was one of 2-year-old Edgar’s favorite things to say.

But, um, I guess we haven’t read The Bible enough as a family. Oops.

I’m not sure, but I’m assuming that Edgar’s thinking went something like this: 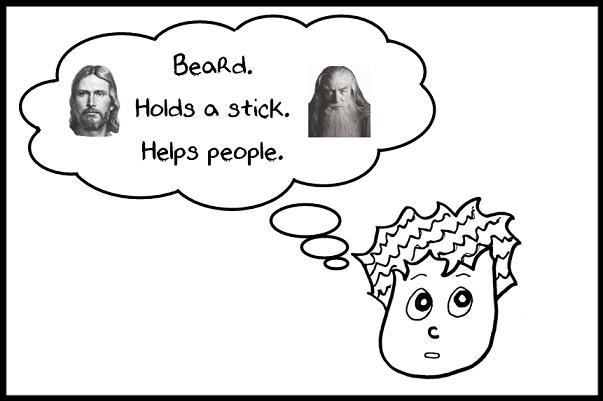